My 2008 Thanksgiving went really great. I could not even believe it. Mom and I spent dinner with the P family. Mrs. P and my Mom attended the same high school together, so when Mrs. P's husband heard my Mom's in town, the family immediately invited us for Thanksgiving dinner. It was a wonderful and very relaxed party unlike the ones I've attended in the past. The company was great, there was so much food, and lots of stories to tell and listen to. Aside from the sumptuous dinner, I also met a couple of new acquaintances and friends. I was such a fool to dread the arrival of the holidays.

One of the days I've actually been looking forward to is the day after Thanksgiving - Black Friday. This is one of the busiest shopping days of the year, and it also signals the beginning of the Christmas season. The big word for that day is SALE; some as low as 75%. Prior to Black Friday, I spent a lot of time online researching which stores were giving the best deals. On Friday at 5 AM, Mom and I braved the chilly temperatures and headed for the mall. The mall was filled with shoppers busily hugging their latest toy purchase or pushing carts full of their new acquisitions. I was impressed at how organized the stores were in dealing with the huge number of shoppers, as more cashiers were added, store workers were ushering people to the right line making the check out process very smooth and orderly. Since I detest crowds, I made sure I had a shopping list, went straight for the goodies I wanted, paid for my stuff, and got out. I bought some new work clothes, sweets, and DVDs. Here are a few photos of my new goodies: 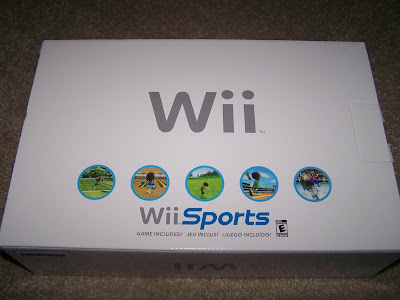 Yes, I finally got my very own Wii Console. It's been on my "wish list" for a long time. It feels really great to finally have one, and playing it is much more fun. Anyone up for a Wii challenge? 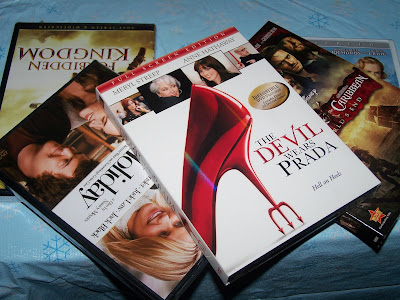 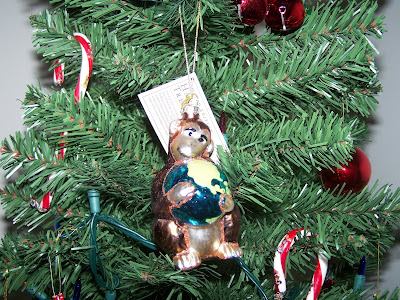 Speaking of freebies, I got a free limited edition, handmade, glassblown "monkey hugging the world" Christmas ornament from my favorite store. There were a hundred of these given to the first 100 customers of the day. In addition to the Christmas ornament, now hanging on my tree, I also won two wine glasses and a serving bowl from a scratch ticket from the same store. I guess this is one reason why it is my favorite store.
*******

What is Black Friday?

* According to Wikipedia, "the term "Black Friday" originated in Philadelphia in reference to the heavy traffic on that day. More recently, merchants and the media have used it instead to refer to the beginning of the period in which retailers are in the black (i.e., turning a profit). It is not a term of endearment... "Black Friday" usually brings massive traffic jams and over-crowded sidewalks as the downtown stores are mobbed from opening to closing." To read more on Black Friday's origins and history, please click here.

My take? It is simply called "black" because of the stress it brings...lol.