I think that's what Christmas is all about - spreading cheer!

After all, Christmas is not about you or me.

It's about making love ones and others happy.

Email ThisBlogThis!Share to TwitterShare to FacebookShare to Pinterest
Labels: holidays

It's Monday and it's almost 9 AM but I'm still in my pjs. It's my first snow day of the year, which means no work (big smile). The snow blizzard has pretty much left the DC area buried and commute is a bit crazy. Yesterday on my way to check on Pinky, the freeway was littered with cars stuck on the snow or sliding uncontrollably. Days like these really require some good driving skills. Below are photos I took during and after the snow storm just to show what we're going through at the moment. 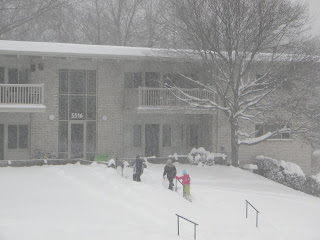 The neighborhood kids getting ready for some sledding and sliding. 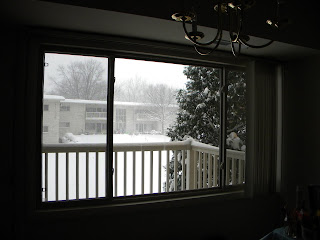 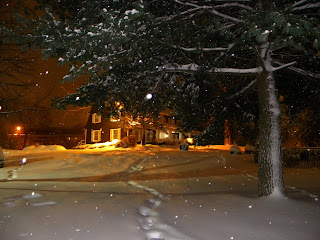 Going out for a night walk during the snow storm. 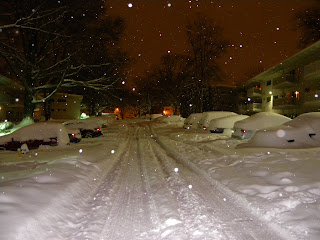 Unplowed street and the cars starting to get buried with snow. 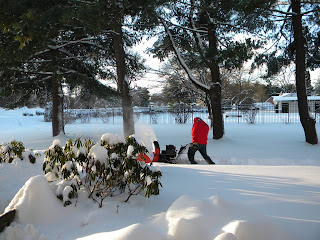 The day after - snow blowing! 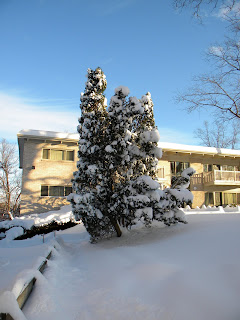 How about a natural holiday tree? 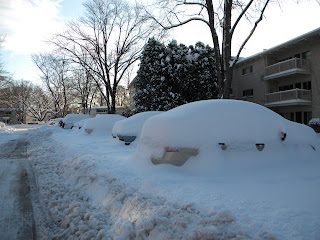 Imagine trying to back out with this much snow. 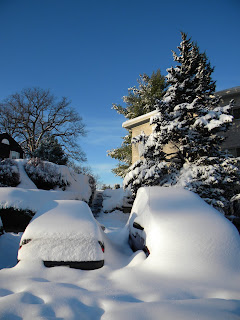 I was thinking about sliding down my neighbor's car. 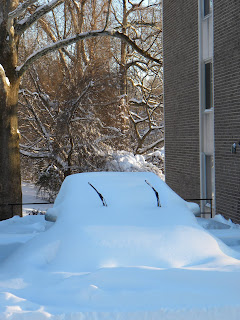 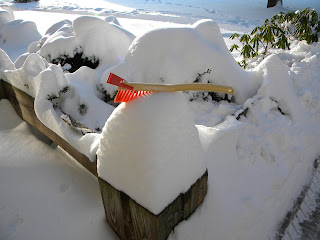 My faithful car ice scraper. Bought it for a dollar when I was living in New Jersey. 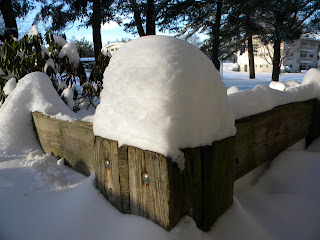 How many halo-halos can I make with this mound of snow?

Since I'm not working today, I might go out for a little shopping later. I'll also spend the rest of the day wrapping some last minute gifts.

How is everyone doing? I hope well and ready for Christmas.

As of now, we have gotten about more than two feet of snow. I just got in from scraping snow from my car, and I'm hoping we won't get anymore snow. I had a few plans today that were canceled and that I do hope things will be in my favor tomorrow. Moving in the midst of a snow storm is no fun and that I was hoping to get settled at my new house before Christmas, but it doesn't look like that's going to happen. For now, I'm stuck at home and decided to blog and share some photos from my recent trip to Atlantic City.

Last week, my friend, F, and I made our trek to Atlantic City. It's been two years since I was in AC, so I was excited because this was another chance to experience the place and also see if the place has changed. We stayed at the Borgata and got great room rates. Borgata after all has been getting all the raves in AC. When we arrived, Borgata didn't disappoint and that I would totally stay there again. Below are some photos from the trip. 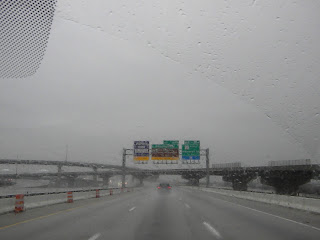 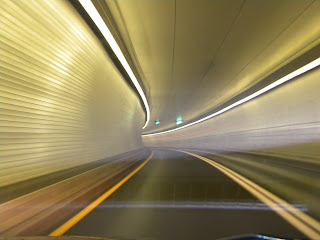 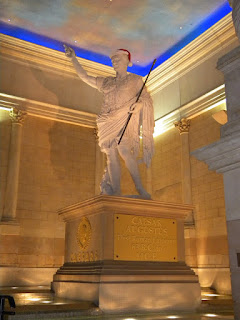 Entering Caesar's Palace, and Caesar is wearing a Santa hat. 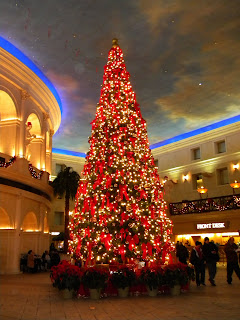 The tree at the Caesar's Palace. 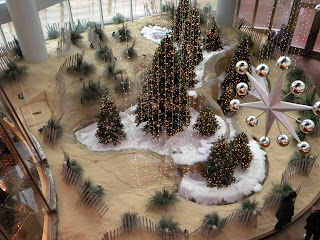 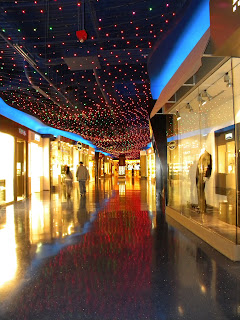 Shopping beneath the starry ceiling. 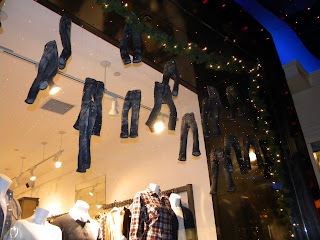 A display of really small jeans. 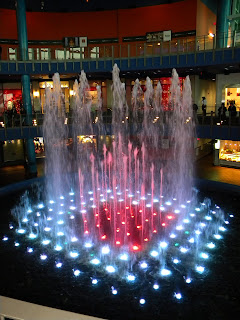 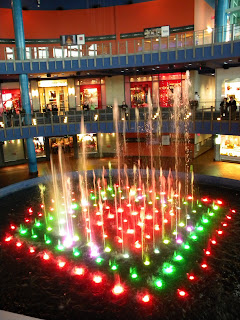 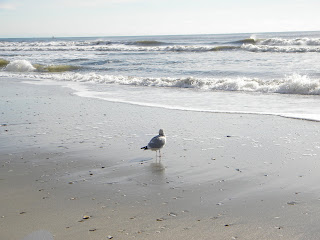 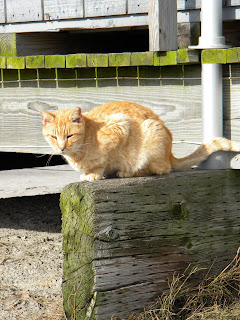 A stray cat at the boardwalk. There were a lot of stray cats there. 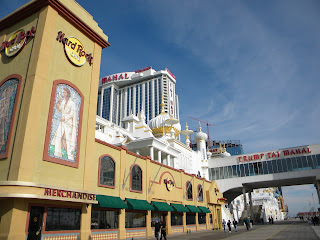 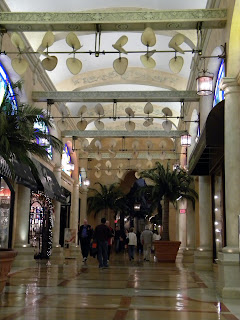 The Market Cafe at the Tropicana casino. 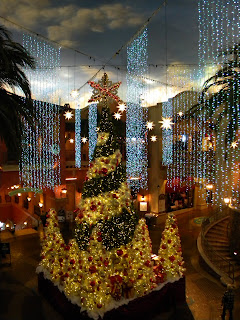 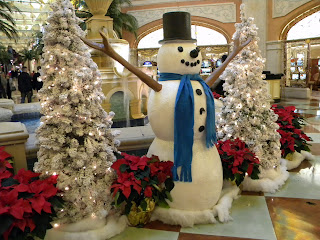 Snowman at the Tropicana 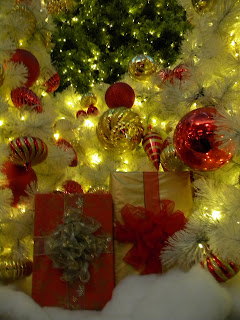 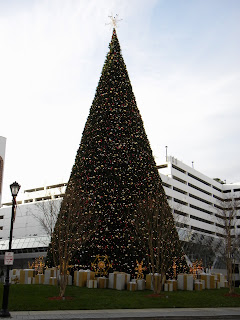 I think this is the AC Christmas tree located at the front of Trump Plaza.

There are a lot of changes in AC especially with the additions of the malls at the boardwalk. I think there's a push to make it look like Las Vegas, but I think it will take quite a while before AC can compete with Vegas. On its own, AC has the advantage of being near the beach and its boardwalk has a beauty on its own. Finding trinkets at the boardwalk shops is something I really enjoy. AC has its own beauty and that I'm glad I got this chance to see this place again.

Where Are You Christmas?

Remember the movie "Elf"? Where Santa's Sleigh couldn't fly anymore because people lack the Christmas spirit? I'm afraid I am contributing to the sleigh's inability to fly because I lack the Christmas spirit. Although there's chill in the air, snow on the ground, neon lights adorned houses glimmering in the dark, glossy and shiny decorations hanging on every store, I still feel that I am lacking something. I feel that Christmas is approaching too fast, too soon and that I am caught not ready.

This lack of Christmas excitement could be attributed to me celebrating the holidays away from my parents this year. Clearly, I've been missing the islands so much lately, and that I'll terribly miss my annoying, noisy cousins and most of all, grandma's cooking. Yesterday, I received a card from grandma. I was in tears because she never had to send me a Christmas card since I was always home during the holidays. This week, grandma sent me a family photo. I guess she's telling me that even if I can't come home this Christmas, the family's still with me.

After all, Christmas is about - family and friends. So, where are you Christmas? Probably buried deep in my heart.
20 comments:

On Saturday, we had our first December snow. I planned for a lazy weekend since I'm still recovering from my recent biopsy, but playing on the snow was too hard to resist. So with a sore back, I donned my jacket, gloves, and boots, and went out for a long walk. It was a struggle to still walk around, but when I felt the snowflakes hit my face, I felt a sense of hope and healing. Feeling the soft, cold snowflakes melt on my face invoked life and a sense of gratitude - that I could still feel and that I am still here. I was feeling rather low the past few days and finding inspiration was a task. I think that there are things we go through in life that sometimes beat us down, but I don't consider myself beat, I was just harboring the fear of uncertainty. I'm still trying to make sense of what's going on and trying to figure out what's next. It will be a couple of weeks before I hear about my biopsy results, and the waiting is killing me.
17 comments:

Part of my weekend getaway was to take my mind off from my scheduled bone marrow biopsy, which took place yesterday (Dec. 1 - Mom's birthday). Getting through the biopsy procedure proved to be a challenge, but a special thanks goes to my friend F who kept watch during the whole process. Thank you very much.

I chose local anesthesia the last bone marrow biopsy, but this time, I went for conscious sedation. In preparation for my conscious sedation, I wasn't allowed to eat or drink anything before the bone marrow biopsy, which was scheduled at 1 PM. The usual blood work took place, but this time there were 17 test tubes of different sizes to be filled. I was taken aback at how much blood they were going to draw. After the blood work, I suddenly felt light headed and everything just went dim. I could hear the technician saying my name, but it sounded so far away. I woke up later lying down on a bed, with a bag of ice on my neck, and soaked with sweat. Passing out was a scary experience.

Afterwards, I met my new doctors. I said "new" because I am meeting these new doctors for a second opinion regarding my Aplastic Anemia. I was told that before any conclusion and diagnosis will be properly given, we'd have to wait for lab tests and of course, the result of my bone marrow biopsy. My new doctors were nice and very encouraging, and I'll be meeting them again next month.

At the end of the day, I was prepared for conscious sedation. I was nervous as hell. I was hooked to an IV and all types of monitors were also attached to my chest. It was a new experience for me and the tubes clearly made me nervous. I was half awake during the procedure, and I could still feel the pressure and the pain. Unlike last time, I was more interested in fighting to stay awake than what was going on with the biopsy. Next time I knew, they were applying bandage and I was told to go ahead and sleep.

I slept for a good 20 minutes. I woke up to F bringing in crackers and some Apple juice. The nurse adjusted my bed for me to be able to sit up. I guess they knew I was so hungry. I crammed the crackers in my mouth, gulped the juice and slept some more.