"The most obvious and largest part of the Fremont Street Experience is the Viva Vision canopy and light show. The canopy towers 90 feet above the ground and spans the length of five football fields. Featuring more than 12 million LED modules and 555,000-watt sound system, the light show attracts tourists and locals alike. The first light show was broadcast in 1995. Nearly a decade later in 2004, $17 million was invested in upgrading the Viva Vision canopy. Significant improvements were made and now it has 10 times higher resolution, resulting in clearer, sharper pictures. It can also display 16.7 million color combinations.  The display is so sharp, live video can be broadcast on what is the world's largest screen." (Source: http://www.vegas.com/attractions/off_the_strip/fremontstreet.html) 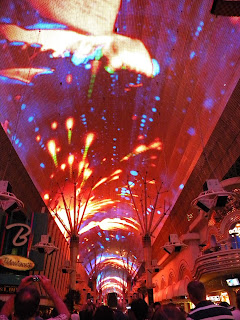 A delight for the ears and the eyes - Fremont Street Experience is a must! 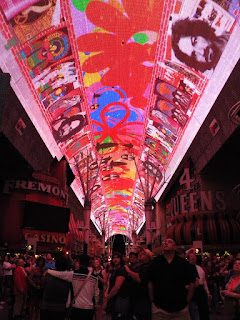 Don't look down, or else you'll miss the show. 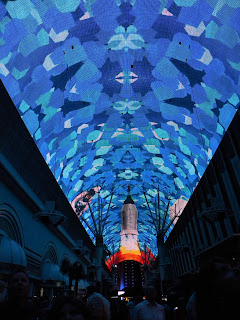 This is my favorite shot. The rocket travels the entirety of the ceiling. 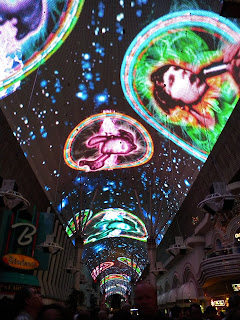 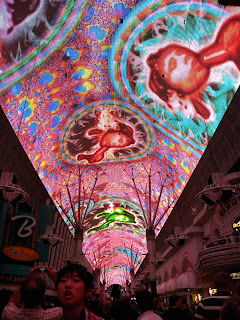 It's a dazzling show. 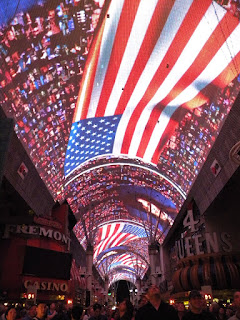 This was during The Star Spangled Banner.
Hours of operation: Show times are every hour on the hour from 8:30 p.m. - midnight, and it's free. There are also free concerts going on while you're waiting for the next light show. Plus, you can busy yourself checking out the nearby shops for trinkets.

A delightful Wednesday to all!