While waiting in line to get into the Governor's Palace at Colonial Williamsburg, the gate usherette in full colonial costume started explaining what constitutes a woman's attire during colonial times. I was astounded at how many layers of garments they wore back then. I couldn't believe that a woman would be wearing a hat, a cape, a cloak, a mob cap, a shift, sleeve ruffles, stays (corsets), etc. all in one outfit. I kept thinking how constricting and hot would that have felt.

I took these photos (below) last weekend during my trip to Colonial Williamsburg. I've always been fascinated with how the women of colonial times endured wearing all these layers of clothing and still carried themselves so well. I honestly think that putting a gown on during the colonial times is a chore. Although it seems that colonial fashion were constricting to women, I still think they're lovely to photograph.

Please enjoy the photos below and the quotes I took from reading Baumgarten's research articles online regarding women and women's clothing during colonial times. 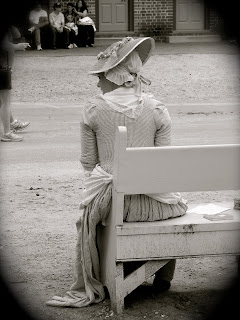 "For some, it is a wish to experience the beautiful fabrics, elaborate decoration, and tactile qualities; experiences no longer found in most of our own clothing. For others, it is a desire to understand people from the past a little better; if we know such details as how they dressed themselves in the morning, what it felt like to be laced into stays, or what it was like to wear coarse linen and woolen while working in a Virginia tobacco field, we might better understand the routine, human aspects of their daily lives, which are so seldom revealed in the written records they left." (Baumgarten, Linda. Looking At Eighteenth-Century Clothing. http://www.history.org/history/clothing/intro/clothing.cfm) 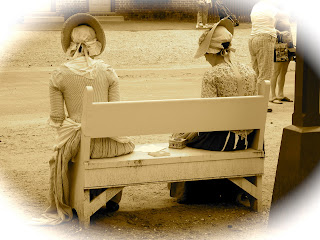 "When we look at ladies' corsets –"stays" –from the period, we cannot imagine how a woman could subject herself to such a garment. Yet the wearing of stays was as much linked to concepts of modesty and support as it was to figure shape; without her stays for most public occasions, a woman was considered not quite properly dressed at best and a "loose woman" at worst. Someone who had worn stays from girlhood might scarcely have questioned their comfort or lack of it. (And who is to say that stays were any more uncomfortable than pointed-toe, high-heeled twentieth-century shoes?)" (Baumgarten. http://www.history.org/history/clothing/intro/clothing.cfm)

The lady in costume is pregnant (not visible on photo), and I wondered what life would have been like for her during those times. "Women's lives in the eighteenth century usually centered on their families; there was little likelihood of a career outside the home. Women went into childbirth uncertain not only of their own survival but of their child's, as well. It was not uncommon for a woman to give birth seven or eight times during her life, with only five or six children surviving to adulthood. Despite high mortality rates, women expected to have large families. Esther Edwards Burr, mother of Aaron Burr, was daunted by her future prospects after the birth of her second child. She wrote in 1756, "When I had but one Child my hands were tied, but now I am tied hand and foot. (How I shall get along when I have got ½ dzn. or 10 Children I cant devise.)" (Baumgarten, Linda. Fashions of Motherhood. http://www.history.org/history/clothing/women/motherhood.cfm)