Riding With The Pacman

Yesterday was another busy morning commute to DC. Sometimes, I wonder where I get my strength and patience to get up every single work day and deal with I-270 traffic plus the packed trains just to get to work. During my 45-minute train ride, I usually keep busy with a book or scan through the pages of the Express but yesterday morning I had a nagging headache, so I decided to take a power nap instead. I dozed off for a few minutes and was woken up with the rustling of newspaper pages. I opened my eyes and saw .... 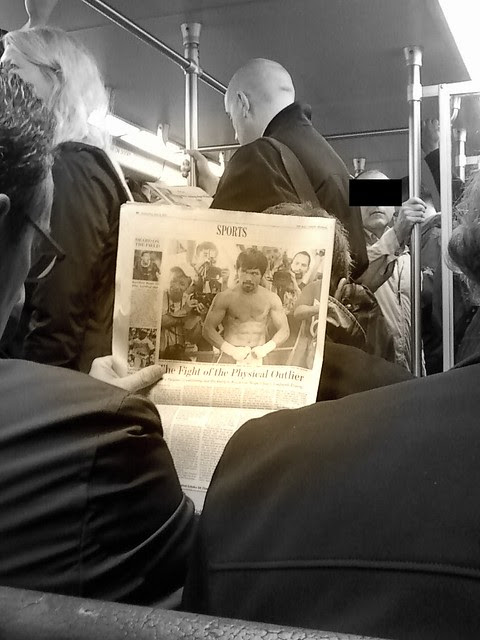 A DC Metro rider reading about Manny Pacquiao from The Wall Street Journal.

I had a smile on my face seeing a huge photo of Manny on The Wall Street Journal. I wanted to grab the newspaper from this guy but I exercised restraint. Whenever I see Filipinos succeeding, I get a great boost of Filipino pride. So after getting off my stop, I hurriedly walked to my office and grabbed the office's Wall Street Journal. I dismissed the depressing front headlines and went straight to the sports page.

Here are some quotes:

The Fight of the Physical Outlier: Manny Pacquiao's Conditioning, and His Ability to Win Across Weight Classes, Confounds Experts

The enduring mystery is how he has managed to win titles in a record eight weight classes, from flyweight (112-pound limit) to light-middleweight (154-pound limit). Unlike any fighter in history, he has packed on the pounds without surrendering his searing speed and pulverizing power. While Pacquiao's fitness isn't completely off the charts in any of one category, he has been able to gain weight without sacrificing of his fistic skills.

"Manny is on the level of the most conditioned athletes in the world," the trainer [Roach] said. "He's a phenomenon."

"Sure, Manny is fast and hits hard, but the thing that is special with him is his intensity," says his sparring partner Shawn Porter. "It is electric in there. He is always pushing the pace."

In the end, Roach believes Mosley has a hard time with fast opponents who won't come right at him. He's confident that his magnificently conditioned, hard punching fighter will be the first to register a "loss by KO" on Mosley's long ledger.

All the best to the Pacman!