Crypt Of The Capuchins

When we visited Rome in 2010, I was determined to visit the Crypt of the Capuchins, since I never did took the time to visit this place while I was living in Rome in 2007. The crypt is quite easy to find. It is walking distance from the Stazione Barberini (Metro Station Barberini), which is the same stop for the Fontana di Trevi, Piazza Barberini and Via Veneto, which is quite known for shopping and cozy cafes. When we found the Crypt, we paid about 2 Euros, which is more of a donation than an entrance fee. The nun who was manning the desk that day was very strict about observing silence at all times and pointed to my camera saying, "No photographs allowed."

My experience at the Crypt was both eerie and curious. Eeriness because I was walking in the presence of the departed and curiousness of how someone thought of turning bones into art. The place has a very peaceful feel and it was strangely cool inside. It's amazing how many bones they have in there and more interesting is how they are displayed. Since photography isn't allowed, I scanned the postcard I got during our visit. 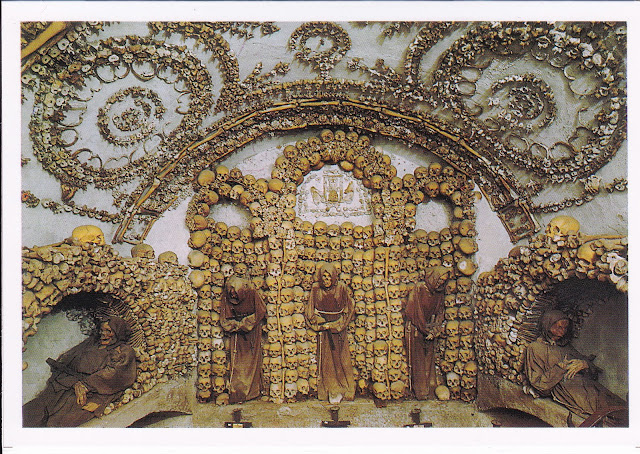 Bones at the Capuchin Crypt 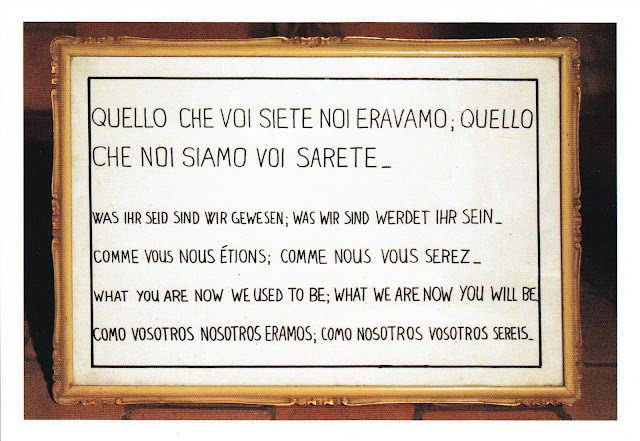 I thought this is an interesting quote.
From the postcard:


In 1630, the Capuchin friars - so-called because of the "capuche" or hood attached to their religious habit - left the friary of St. Bonaventure near the Trevi Fountain and came to live in the present one, of which only the church cemetery remain.  The remains of the deceased friars were transported from the old friary and laid to rest in this cemetery, underneath the present church. The bones were arranged along the walls, and the friars began to bury their own dead here, as well as the bodies of poor Romans... Here the Capuchins would come to pray and reflect each evening before retiring for the night. Over the years, until 1870, further alterations transformed this burial place into the work of art we see today. It's message is clear: death closes the gates of time, and opens those of eternity.

Apparently, "when the monks arrived at the church in 1631, they brought 300 cartloads of deceased friars. Fr. Michael of Bergamo oversaw the arrangement of the bones in the burial crypt. The soil in the crypt was brought from Jerusalem, by order of Pope Urban VIII. As monks died during the lifetime of the crypt, the longest-buried monk was exhumed to make room for the newly-deceased who was buried without a coffin, and the newly-reclaimed bones were added to the decorative motifs. Bodies typically spent 30 years decomposing in the soil, before being exhumed." (Source)

I thought this was a great way to save sacred space.