When I think of Iceland, I think of glaciers and volcanoes; that's exactly what I saw when we visited Jokulsarlon glacier lagoon.


Jokulsarlon glacier lagoon is one of Iceland's most spectacular sights, located about 60 km east of Skaftafell National Park and almost 400 km from Reykjavik. Jokulsarlon borders south and east part Iceland, at the roots of Europe's largest glacier Vatnajokull.  Breidamerkurjokull, an outlet glacier of the great glacier Vatnajokull, crumbles down the steep mountainside of the glacier and big icebergs break off into the lagoon where they float around before melting. This is a very popular sightseeing attraction, widely regarded as the most picturesque scenery in all of south Iceland. (Source here.) 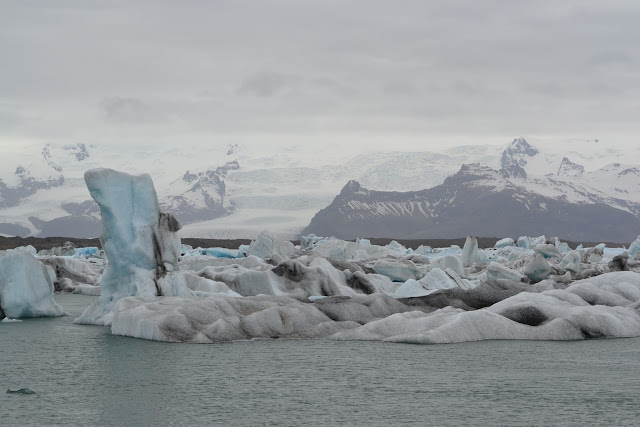 Jökulsárlón has been a setting for four Hollywood movies -- A View to a Kill, Die Another Day, Tomb Raider and Batman Begins -- in addition to the reality-TV series Amazing Race. 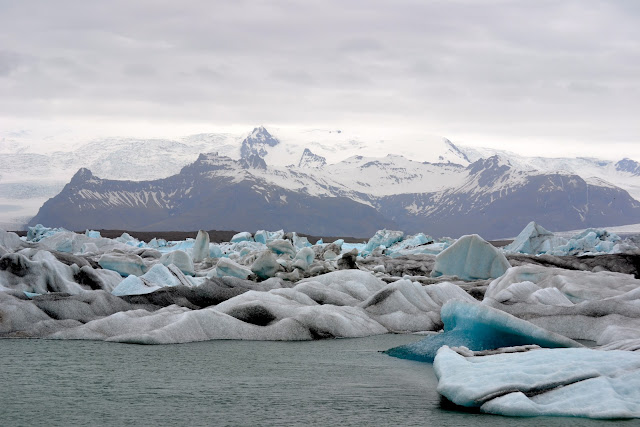 For me, this is absolutely one of Iceland's most spectacular sights and a must see for any traveler. 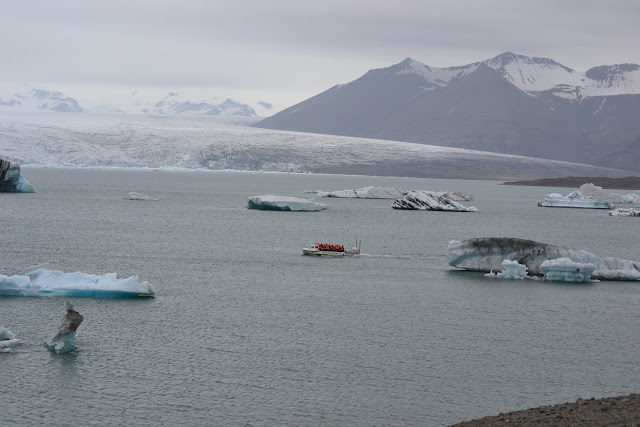 We took a tour boat to have a closer look at the floating icebergs and gaze at the Vatnajökull ice cap. 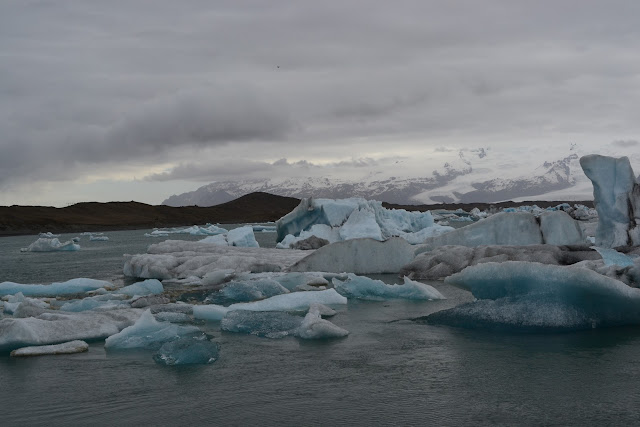 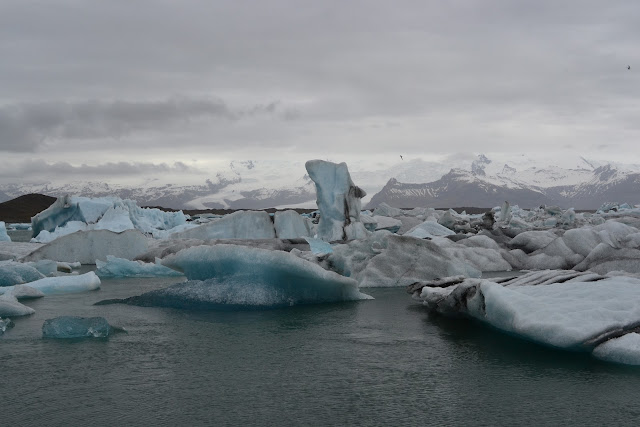 Even in a country well known for its astounding natural beauty, Jökulsárlón stands out. The combination of majestic floating icebergs, the giant icy blue lagoon, the contrasting black of the sandy shore and the soaring dome of the nearby Vatnajökull ice cap is so breathtaking, it hardly seems real.

It’s no wonder this amazing lagoon is one of Iceland's most popular natural wonders. Jökulsárlón's hypnotic beauty draws tourists, photographers and film crews alike to its shores. It has been featured in advertisements, movies, and even on a postage stamp – not to mention, of course, countless computer wallpapers across the world.
(Yohani Kamarudin) 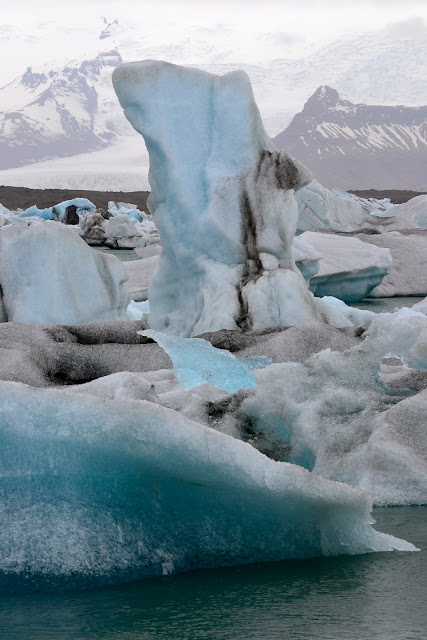 The black dirt on the icebergs were known to be from a volcanic eruption thousand of years ago. An iceberg is a history book - every single ash and every single trapped insect is a page waiting to be read. 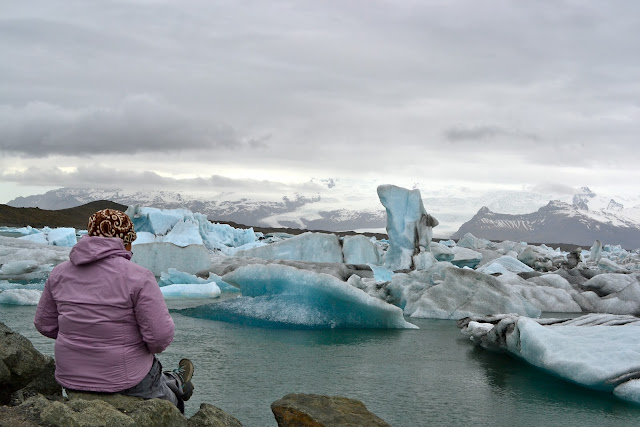 My troubles ceased as I gazed at this staggering beauty. This is most definitely one of the most beautiful places I've ever been. 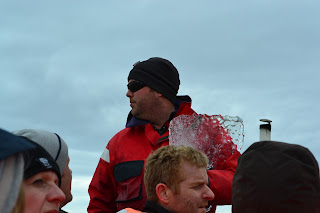 Our boat guide clutching a piece of ice that chipped from on of the icebergs. We tasted a piece of that ice and it tasted sweet. A perfect way to cool off as we were already freezing in negative temperatures. If I remember it right it was -15 degrees when we were there. 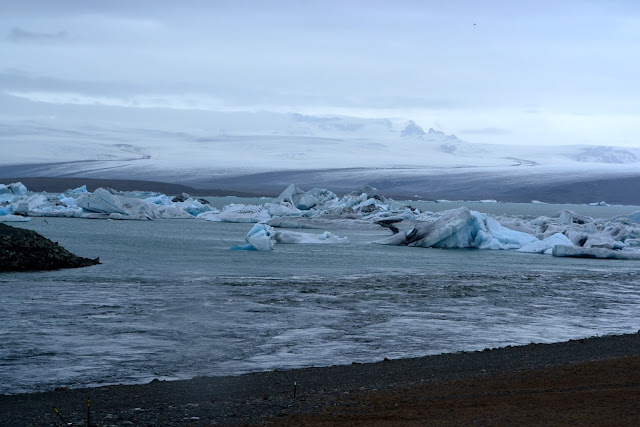 Out of this world scenery. 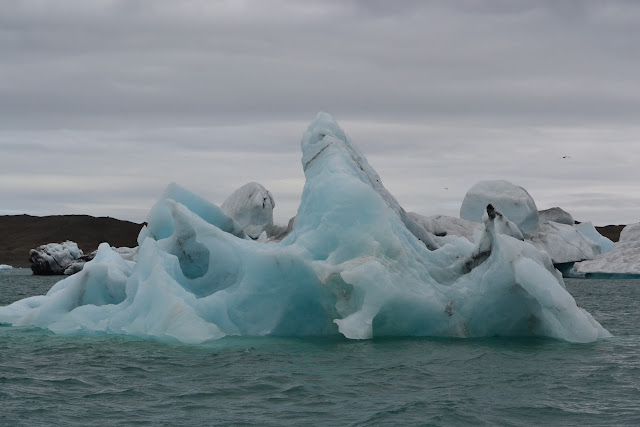 Nature at its best.