If you were chosen, would you go to Mars knowing that it's a one-way ticket?

When I'm not snoring sleeping on the Metro on my way to work, I usually scan the pages of express, a free publication offered to Metro riders.  This article (photo below) got my attention.

This Mars thing is from a company called Mars One. There were 200,000 applicants interested to go to Mars. Currently, there are 660 people chosen. Tomorrow, it will be reduced to 100.  The three people featured below are still in contention. As you can see, one is from Virginia and two are from D.C.

They have several reasons why they want to go, but one thing I can deduce is the chance to make a mark. Don't we all want that? Or, do we? Maybe not, but I don't know. 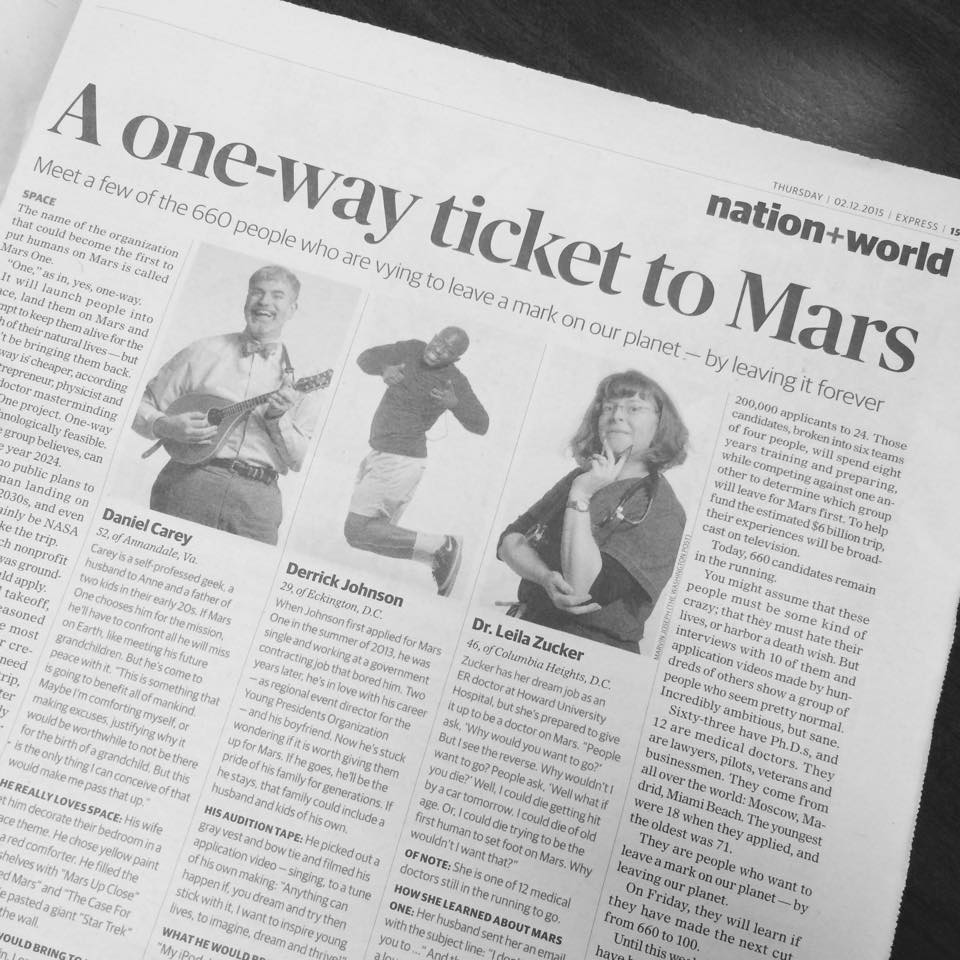 In the article, the questions, (1) What would you miss on Earth? and (2) What would you bring to Mars?, were posted to Daniel, Derrick and Dr. Zucker.  Daniel of Virginia said he'll miss the birth of his grandchild. Derrick of D.C. said he'll miss his family, but he also mentioned that going to Mars would bring pride to his family as well. Dr. Zucker of D.C. didn't mention anything she'd miss and she sounded most apt and prepared with her decision to go. I quote her statement below:

I love the whole idea of becoming a pioneer and the idea of living in another planet is so exciting. But it also worries me that we've been living on Earth yet we're failing to protect and take care of it.  How could we even think of populating yet another planet? I don't know...just my thought.

But if given the chance, would I go? No, thank you.

You can say that I don't have the spirit of a space pioneer, but I don't like the idea of a one-way ticket to Mars. It's scary. Perhaps this fear stems from those science fiction movies I've seen featuring human devouring aliens and even if there are no hostile, bloodthirsty aliens out there, look at that movie, Gravity, even the character that George Clooney plays dies in space.  Call me a coward, I don't care. I don't like a one-way ticket to uncertainty. Not to mention I still haven't explored much of Earth. Besides, I'd miss my family and friends too much.

I guess the second question does not apply to me.

How about you? Would you go? Why? What would you bring to Mars?
Email Post
Labels: kayni thinks